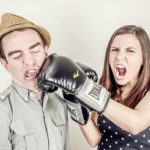 It is no mystery that siblings often fight with each other. And while childhood presents many opportunities for disputes, conflicts are by no means limited to the younger years. We see in our practice a common scenario of adult children engaging in bitter arguments with each other over the care of their parents. A March 2017 appellate case from New Jersey is yet another example of that phenomenon. See R.G. v. R.G. (N.J. Super. Ct., App. Div., No. A-0945-15T3, March 14, 2017).

In the spring of 2015 their mother developed complications from pneumonia. When she was discharged from the hospital, the younger brother took steps to place her in a nursing home. But R.G. and their sister both objected to that placement. Their main objection was because placement in a skilled nursing facility would prevent mom from continuing to live with their father. Yet soon the sister apparently changed her mind. She had second thoughts and concluded that the level of care mom needed was well beyond what she and the younger brother could provide to her. Nonetheless R.G. persisted in trying to explore alternatives that would keep mom at home.

The legal result of the judicial action referenced above, where R.G. attempted to lift the restraining order that the lower court had put on him, is not particularly relevant to us. But the simple fact-pattern of wildly different opinions of what is best for mom and dad is something we see all too often. Granted, we do not tend to see such disputes rise to the level of physical assaults and threats of violence. But the situation of siblings having very strong and differing opinions about the care of their parents does occur frequently. And unfortunately what tends to get lost in the shuffle are the parent’s own preferences, or if a parent is no longer capable of making those decisions, then the documented preferences of the parent back when they were still capable of deciding things.

Could this particular dispute have been avoided? There are some facts that would be helpful to know. For example, we are not told directly if mom was or was not capable of conveying her own wishes to her family at the time she was being released from the hospital. And while we are told the younger brother was the attorney-in-fact for health care, we do not know if mom ever discussed or otherwise put into writing her specific health care related wishes.

We believe this family crisis might have been minimized or even avoided altogether if R.G. and his siblings and parents had sat down with an elder law attorney to work together to help plan for mom’s future. If R.G. had been part of that conversation, then perhaps he would have been left with a better sense of his mother’s wishes. And that may have made it more difficult for him to interpret his younger brother’s actions as anything other than simply carrying out those wishes.

As a life care planning law firm, Weatherby & Associates, PC strives to have as thorough and comprehensive a conversation as possible with our senior clients. Whenever possible we try to engage the adult children and other pertinent family members in that planning process. And invariably we get much better results when things can be decided long before there is a health care crisis.

My experience with Weatherby & Associates far exceeded my expectations. I remortgaged my home and showed my Estate Planning book to other law firms and they said they were the finest set of documents they have ever seen. Related Read More
– J.T.